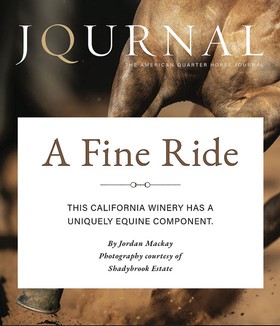 THIS CALIFORNIA WINERY HAS A UNIQUELY EQUINE COMPONENT.
By Jordan Mackay

In March 2019, Doriane Woolley was driving up an oak studded country road just outside Napa, California, a place she’d never been, on the way to a job interview, when something made her stop. An experienced rider and barn manager, Doriane was on the run from a Michigan winter in the icy grip of a -45-degree polar vortex. The New Mexico native was cursing the day she had left Texas horse country for a job in the icy Midwest. It was that Texas horse connection that caused her to stop. Suspended over the road was a large wooden plank carved with the words “Rapp Lane.” A sign embedded in the stone pillars flanking the drive read “Rapp Quarter Horse Ranch.”

“I stopped and stared at it and said, £No way!’” Doriane recalls. “I had worked with the Rapps, who were very dear friends of mine, in Texas. And this was where Phil, who is a leading cutting horse trainer, grew up.”

Through this gate was Shadybrook Estate, a winery and horse operation that was looking for an equestrian center manager. Doriane was there to interview for the job. She knew Phil had grown up in Napa but had no idea she was headed to the very site where his career began. Phil and his wife, Mary Ann, sold the Napa ranch and relocated the family to Weatherford, Texas, in 1994. Even though the ranch and the valley in general have been transformed by the advent of global wine fame, the Rapp spirit in this property lives on. Doriane got the job at Shadybrook and found respite from the cold. She also found an unusual combination of vineyards and Quarter Horses-Napa past and Napa present...

Commenting has been turned off.